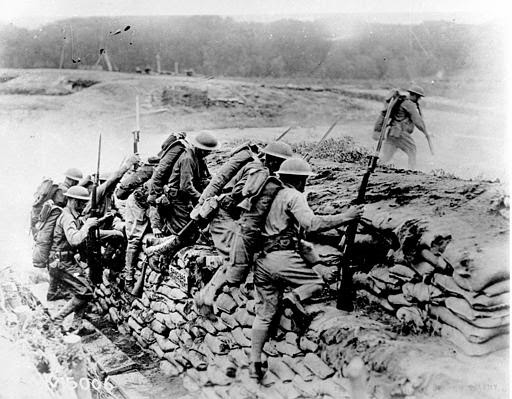 (Above: Soldiers in WWI mounting an offensive)

The SPECS and SLIMS model is traditionally taught as a way to analyse poetry in O Levels and A Levels. Here is an outline of the model:

SPECS
·         Subject-matter: What event, situation, or experience does the poem describe or record?
·         Purpose: What is the poet’s purpose in writing this – what message does he/she want to communicate?
·         Emotion: What is the predominant emotion/feeling/mood of the poem? Does the mood change during the poem? What emotions or feelings does the poet seek to evoke in the reader?
·         Craftsmanship: How does the poet achieve his/her effect? What specific techniques has he or she used in the making of this poem, and what is their effect?
·         Summary: What is the impact of the whole poem for you? How successful is it as a work of art? Does it successfully achieve the poet’s purpose?

SLIMS: How to analyse craftsmanship
·         Structure: How is the poem structured? Does it have a conventional structure such as sonnet, or an ode? Does it have stanzas with a regular number of lines, or any other interesting features of structural design?
·         Language: Is the language appropriate to subject and/or theme? What effect does the language have on the poem’s achievement?
·         Imagery: Are there any striking examples of similes, metaphors, personifications or symbols in the poem? What is their effect?
·         Movement: Does the poem have a regular (slow or fast) rhythm? What is the effect of any rhythmic qualities?
·         Sounds: Does the poem have any significant sound features? Is it musical? Does the poet use onomatopoeia, alliteration, or assonance? Does the poem rhyme? What are the effects of these features of sound on the achievement of the poem?

While the method is useful, it is important to note that not all aspects of the model are of equal importance. Different poems may prove richer in analysis for some areas compared to others. When you write an analysis, it is important that you tackle the most salient features first, since time is of the essence in an exam. However, SPECS and SLIMS can still be a handy way to remind yourself of what aspects of a poem you should consider during analysis.

Now let’s apply SPECS and SLIMS to an actual poem, Dreamers, by Siegfried Sassoon, one of the famed war poets in WWI.
Dreamers

Soldiers are citizens of death's grey land,
Drawing no dividend from time's to-morrows.
In the great hour of destiny they stand,
Each with his feuds, and jealousies, and sorrows.
Soldiers are sworn to action; they must win
Some flaming, fatal climax with their lives.
Soldiers are dreamers; when the guns begin
They think of firelit homes, clean beds and wives.

I see them in foul dug-outs, gnawed by rats,
And in the ruined trenches, lashed with rain,
Dreaming of things they did with balls and bats,[1]
And mocked by hopeless longing to regain
Bank-holidays,[2] and picture shows, and spats,
And going to the office in the train.
Siegfried Sassoon

·         The poem is a Petrarchan sonnet. This is easy to tell as it has 14 lines, as all sonnets do, and it is broken down into two groups, the first of which has 8 lines (this is called an “octave”) while the second has 6 lines (this is called a “sestet”).
o   The octave usually sets the stage, introducing the subject matter of the poem.
o   The sestet provides the resolution.
·         This is indeed the case as the structure echoes the sense.
·         In the octet, the speaker of the poem introduces the plight of a soldier and the contradictions of their life.
o   First, soldiers are constantly confronted by the sense of their mortality on the battlefield. This is shown in the stark imagery of “death’s grey land”.
§  The poet uses implied personification: the fact that the “land” is “death’s” implies that death owns the battlefield as his domain, whereas the soldiers themselves are merely his “citizens”. They have no control over death. Instead, death  rules over them.
§  The colour “grey”, traditionally associated with despair and war, also adds a sense of bleakness to the imagery.
o   Moreover, the soldier’s experience is fundamentally an unrewarding one as suggested by the speaker’s financial metaphor where he says a soldier does not draw a “dividend” from “time’s to-morrows”.
§  In other words, the soldier does not earn interest on his investment. In the context of this poem, this means more than just a financial investment; it is also a deeply emotional and physical one for the soldier, who put their lives on the line for the sakes of battle. [language]
o   The soldier’s plight is even worse as they themselves are bitterly divided among “his feuds, and jealousies, and sorrows”
o   Finally, the soldier is in a deeply contradictory situation. While they are expected by the public to have noble, extraordinary and selfless dreams of sacrificing their lives in some “flaming, fatal climax”, their actual dreams of “firelit homes, clean beds and wives” are banal, mundane and selfish; they simply want to return to the simple pleasures of normal civilian life!
§  This is clearly pointed out by the contrasting language: the drama and tension implied by the abstract word “climax” versus the enumeration of concrete and simple desires of “homes”, “beds” and “wives”.
§  Note the alliteration of “flaming” and “fatal”, creating a sense of action that reinforces the sense of dramatic sacrifice [Sounds]
o   Also note how the sense of heroic myth and drama in the phrase “flaming, fatal climax” is echoed in the earlier mention of “great hour of destiny”. This whole premise of the heroic soldier is amplified by the rhetorical parallel structure of the whole octet where each phrase begin with “soldiers are…”, “soldiers are…”, “soldiers are…”
·         Having built up the idea of the heroic soldier facing judgement and trial in the battlefield (“great hour of destiny”, “flaming fatal climax” in the octet, the speaker quickly and brutally dismantles the myth in the sestet by turning to the gruesome and dispiriting reality of what the soldiers actually experience:
o   Their environment is dirty and half-destroyed: “foul dug-outs, ruined trenches” [Imagery]
o   They are constantly buffeted by nature working against them (“gnawed by rats”, “lashed by rain”) à The effect is enhanced with the use of onomatopoeia, where the sounds of the word literally resemble the described action: “gnawed”, “lashed”
·         The poem ends by turning back to the dreams that soldiers have, which is now openly dismissed as unrealistic (“hopeless longing”), and all the more tragic for the fact.
o    Again, these are very mundane and quotidian things they are dreaming of, “balls and bats”, “bank-holidays”, “going to the office in the train”, things which normal people easily take for granted and dismiss as nothing special, but which soldiers now treasure because of the loss of their former civilian life and the seeming impossibility of returning to that life.
·         Conclusion: [Summary]
o   Through the vivid juxtaposition of the ordinary comforts of civilian life and the atrocious conditions soldiers endure in the battlefield, the poet shows us the tragic, brutal and hopeless nature of a soldier’s life where even these small things seem impossible to regain, and remind us of the immensity of a soldier’s sacrifice.
o   The poem also deflates the heroic myth of the soldier at war showing us that the reality is that soldiers do not want to be heroes who die for the country in a “flaming, fatal climax”; rather, they desperately want to survive in war and hope in vain to regain the idyllic and carefree life of a civilian. In this sense, the message of the poem is ultimately pacifist: war does not make heroes; it makes victims.


Did you find this useful? If so, do consider joining our even more engaging and informative tuition classes here ;)

If you have any questions or requests, you can post them in the comments box :)

[1] The leather balls and flat bats used in cricket.
[2] A ‘bank-holiday’ is the term used in Britain for a public holiday.